“After losing our dear lil’ miniature daxie, Freddie after 14years, our lives & home were not the same. We decided that if we were to have another dog it would, without doubt be a rescue daxie. I received an outpouring of kind messages from the daxie facebook group after losing Fred. Although it was very hard to see other sausages I remained a member & we are so pleased I did! It was here that I saw The Red Foundation & read about how it all started & the amazing work they do. It was then that we decided to complete an application form. A few days later when I received Hayley’s text of a potential match and she had emailed me the info. I was in a conference in London & my mind was so busy in work, when I initially read the text I thought I’d been matched on a dating site! I have been married for 16years so you can imagine my shock! Once I’d stopped & read Hayley’s email & found we had in fact been matched to two daxie girls!
Our middle aged girls had fortunately been cared for beautifully & her selfless owner had made the toughest decision to rehome them. The decision she made & responsibility we have to love & care them is not underestimated.
We recieve 100 times more love back everyday as they have settled in beautifully. Most of the time they can be found unconscious upside down on the sofa or in front of the fire. They rule the house & all our plans revolve around the girls. Thank you so much to The Red Foundation for matching us with our little girls, we are very grateful. You have made our house a happier one, once again.”

Often people have genuine reasons for needing to rehome their dog but don’t know that organisations such as The Red Foundation exist. They therefore resort to using selling sites.

Sid is one such dog so when someone alerted us to his advert, we contacted his family who were really pleased that we could help.

Sid was originally in Northern Ireland but as we couldn’t find him a suitable home, he travelled across to Scotland.

Sid has had a busy week as not only has he just reached his one year gotcha day, but he’s also celebrated his eighth birthday.

Sid is the first dog that I (Sharon) helped rehome with TRF and it’s lovely seeing how well he’s doing in his new home. 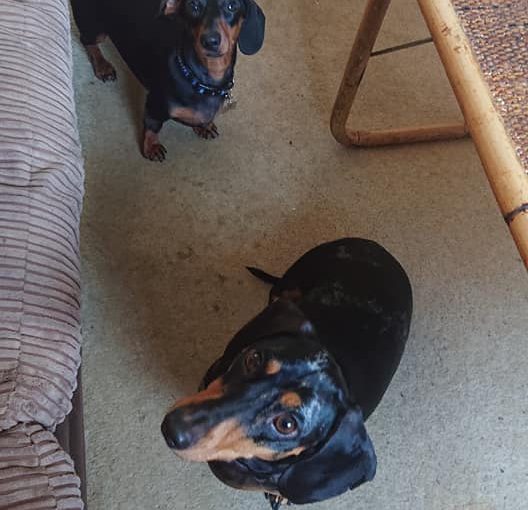 We were contacted by an admin of one of the Dachshund Facebook groups who advised one of her members was looking at having to rehome her miniature dachshund and could we help. We arranged a call with said member and had a good chat about her current circumstances and unfortunately due to a relationship break down, being forced to move and trying to build her business she didn’t feel like she could give frankie the life she wanted him to have anymore. It was an emotional call with tears all round and we promised to find Frankie the perfect forever home. Frankie now has a big brother, a standard silver dapple called Trev and has settled in nicely with his new owners Sue and Simon. Here they both are. Am sure you can guess who is who!