They make look like cute little handbag dogs, but Dachshunds are hounds… Bred to Hunt. The standard size was developed to scent, chase and flush out Badgers and other burrow dwelling animals (This is where the name comes from – It is German in origin and literally means badger dog). The miniature Dachshunds were bred to hunt smaller prey such as rabbits.

Despite their small size Dachshunds have some prominent personality traits – they are known for their daring nature and will sometimes take on other dogs and animals much larger than them.  They are intelligent creatures and very independent, which can lead to stubbornness. 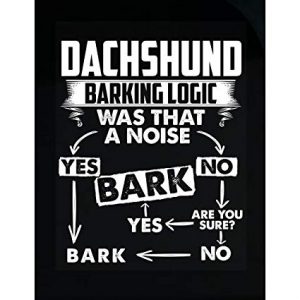 They have a loud bark which they like to use….. a lot!  They can be wary and aggressive to strangers and other dogs, and its very rare to find one that is 100% house trained…. oh you might think you’ve nailed it, but wait until it rains/its too cold/they felt like it and you’ll no doubt find a little surprise somewhere!

They love to burrow and tunnel in blankets, beds …. and your lawn. So if you obsess over a perfectly manicured lawn, you might want to go artificial.

They can suffer with terrible separation anxiety when left alone, so generally like to follow you and be involved in everything you are doing – and that includes making sure you are safe whilst in the toilet.

They love food…. and I mean LOVE food. They can get fat quickly if you over indulge them and give into those pleading eyes every time you take a bite of something. You will never eat without feeling guilty again!

They can suffer with back issues which are extremely expensive and time consuming during recovery.  So having Insurance with a premium level of cover is imperative.

There is always exceptions to the rules but generally if you want a quiet and obedient dog, who is happy to do their own thing … then a Dachshund is not for you…

“Being the owner of Dachshunds, to me a book on dog discipline becomes a volume of inspired humour.  Every sentence is a riot.  Some day, if I ever get a chance, I shall write a book, or warning, on the character and temperament of the Dachshund and why he cant be trained and shouldn’t be.  I would rather train a striped zebra to balance an indian club than induce a Dachshund to heed my slightest command.  When I address Fred I never have to raise either my voice or my hopes.  He even disobeys me when I instruct him in something he wants to do”

However for all their faults, they are an amazing breed, and once you have lived with one you will be spoilt for any other breed, who just wont live up to the character of a Dachshund.

They are funny, charming, cheeky and energetic.  Fiercely loyal to their family, they love nothing better than snuggles…. forget your personal space, most Dachshunds can simply not get close enough to you.  If you’ve never had the inside of your nose cleaned or your eyeball licked, then you’ve got a treat coming up! 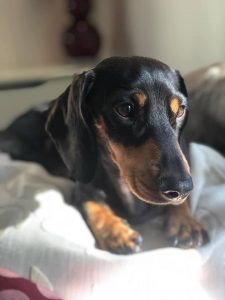 They love their own kind and because of this one Dachshund can quickly become two, then 4…. they’re addictive!  However if you don’t want to own more than one, but want to surround yourself with Sausage Dogs then join in one of the regular Sausage Dog walks across the Country and make new friends for both you and your dog with likeminded Dachshund obsessed people!